Dragon Quest Heroes: The World Tree’s Woe and the Blight Below

Blighted by the night, vanquishing the plight by the children of the light. No video game character conveys endearment and sadism in a single expression as well as the Blue Slimes.

In Dragon Quest Heroes: The World’s Tree Woe and the Blight Below, these iconic teardrop-shaped blobs have never looked more adorable and homicidal, which is what makes killing them en masse one of this game’s greatest pleasures. It’s one of many delights aptly delivered by a collaboration that is one part Dynasty Warriors, one part Dragon Quest. As a hack-and-slasher with countless enemy encounters, character growth, and a shopping list of quests, it was joy to be reminded how much both series have in common.

As a contrast to all the dimension hopping that made up much of last year’s Hyrule Warriors (a Dynasty Warriors take on The Legend of Zelda universe), this Dragon Quest spin-off takes the reverse approach. Instead of protagonists jumping to various worlds in older Dragon Quest games, adventurers from those games come into the new world established in Dragon Quest Heroes. No performance issues in sight despite the battles’ high headcount.

Welcoming these otherworldly guests is a new foursome comprising of two co-protagonists whose default names are Aurora and Luceus, the boisterous King Doric, and an skilled inventor named Isla. I have always admired the mainline series for defying traditional fantasy RPG party formations and archetypes and this new team could easily carry a mainline Dragon Quest installment. That’s a bold statement especially when Aurora and Luceus are two sides of the same coin. Their complementary personalities are best showcased during the cutscenes where your see Luceus’ analytical side and Aurora’s impatience to jump into battle. Aside from a momentary interlude where you’re forced to use one of the guest adventurers, you can have a wholly enjoyable time relying solely on these new characters while ignoring the rest of the roster.

It’s a varied cast where each warrior easily proves their worth over the course of a single battle. The only thing better than seeing 3D models of characters like Dragon Quest IV’s Alena and Kiryl is hearing them speak for the first time. Just as it was momentous to have voice acting in a Final Fantasy game in 2001 with Final Fantasy X, so too was the introduction of dialogue in Dragon Quest VIII ten years ago. Hearing much of the cast speak in English accents in Journey of the Cursed King created a rare connection to the Tolkienian roots of JRPGs. Having Yungus’ cockney accent reprised in Dragon Quest Heroes–by the original voice actor no less–only makes this reunion all the more special.

This mingling of heroes from other worlds helps distract from the story’s laughably generic premise of light versus dark. Even the two co-leaders are named Children of the Light. The story starts off on an uncommonly cheerful note, even by Dragon Quest standards, where humans and monsters are happily co-existing. Due to a spell by a dark wizard named Velasco, the monsters are suddenly reminded that they’re supposed to hate humans. The ensuing chaos and unrest gives the game’s heroes more than enough to deal with, let alone reason to investigate why their non-human friends suddenly turned on them. It’s a good thing the story has its share of twists and guest character interactions to compensate for this otherwise plain narrative. Even with a cast of heroes this large, there’s enough combat flourish to go around.

Nor, perhaps, will it fail to be eventually perceived, that behind those forms and usages, as it were, he sometimes masked himself; incidentally making use of them for other and more private ends than they were legitimately intended to subserve. That certain sultanism of his brain, which had otherwise in a good degree remained unmanifested; through those forms that same sultanism became incarnate in an irresistible dictatorship. For be a man’s intellectual superiority what it will, it can never assume the practical, available supremacy over other men, without the aid of some sort of external arts and entrenchments, always, in themselves, more or less paltry and base. This it is, that for ever keeps God’s true princes of the Empire from the world’s hustings; and leaves the highest honours that this air can give, to those men who become famous more through their infinite inferiority to the choice hidden handful of the Divine Inert, than through their undoubted superiority over the dead level of the mass. Such large virtue lurks in these small things when extreme political superstitions invest them, that in some royal instances even to idiot imbecility they have imparted potency. But when, as in the case of Nicholas the Czar, the ringed crown of geographical empire encircles an imperial brain; then, the plebeian herds crouch abased before the tremendous centralization. Nor, will the tragic dramatist who would depict mortal indomitableness in its fullest sweep and direct swing, ever forget a hint, incidentally so important in his art, as the one now alluded to.

But Ahab, my Captain, still moves before me in all his Nantucket grimness and shagginess; and in this episode touching Emperors and Kings, I must not conceal that I have only to do with a poor old whale-hunter like him; and, therefore, all outward majestical trappings and housings are denied me. Oh, Ahab! what shall be grand in thee, it must needs be plucked at from the skies, and dived for in the deep, and featured in the unbodied air!

It is noon; and Dough-Boy, the steward, thrusting his pale loaf-of-bread face from the cabin-scuttle, announces dinner to his lord and master; who, sitting in the lee quarter-boat, has just been taking an observation of the sun; and is now mutely reckoning the latitude on the smooth, medallion-shaped tablet, reserved for that daily purpose on the upper part of his ivory leg. From his complete inattention to the tidings, you would think that moody Ahab had not heard his menial. But presently, catching hold of the mizen shrouds, he swings himself to the deck, and in an even, unexhilarated voice, saying, «Dinner, Mr. Starbuck,» disappears into the cabin.

[blockquote author=»DALAI LAMA» pull=»normal»]A given kill has the potential to drop a medal version of that respective monster. With the medal, you can summon that monster as an ally.[/blockquote]

When the last echo of his sultan’s step has died away, and Starbuck, the first Emir, has every reason to suppose that he is seated, then Starbuck rouses from his quietude, takes a few turns along the planks, and, after a grave peep into the binnacle, says, with some touch of pleasantness, «Dinner, Mr. Stubb,» and descends the scuttle. The second Emir lounges about the rigging awhile, and then slightly shaking the main brace, to see whether it will be all right with that important rope, he likewise takes up the old burden, and with a rapid «Dinner, Mr. Flask,» follows after his predecessors.

But the third Emir, now seeing himself all alone on the quarter-deck, seems to feel relieved from some curious restraint; for, tipping all sorts of knowing winks in all sorts of directions, and kicking off his shoes, he strikes into a sharp but noiseless squall of a hornpipe right over the Grand Turk’s head; and then, by a dexterous sleight, pitching his cap up into the mizentop for a shelf, he goes down rollicking so far at least as he remains visible from the deck, reversing all other processions, by bringing up the rear with music. But ere stepping into the cabin doorway below, he pauses, ships a new face altogether, and, then, independent, hilarious little Flask enters King Ahab’s presence, in the character of Abjectus, or the Slave. It is not the least among the strange things bred by the intense artificialness of sea-usages, that while in the open air of the deck some officers will, upon provocation, bear themselves boldly and defyingly enough towards their commander; yet, ten to one, let those very officers the next moment go down to their customary dinner in that same commander’s cabin, and straightway their inoffensive, not to say deprecatory and humble air towards him, as he sits at the head of the table; this is marvellous, sometimes most comical. Wherefore this difference? A problem? Perhaps not. To have been Belshazzar, King of Babylon; and to have been Belshazzar, not haughtily but courteously, therein certainly must have been some touch of mundane grandeur. But he who in the rightly regal and intelligent spirit presides over his own private dinner-table of invited guests, that man’s unchallenged power and dominion of individual influence for the time; that man’s royalty of state transcends Belshazzar’s, for Belshazzar was not the greatest. Who has but once dined his friends, has tasted what it is to be Caesar. It is a witchery of social czarship which there is no withstanding. Now, if to this consideration you superadd the official supremacy of a ship-master, then, by inference, you will derive the cause of that peculiarity of sea-life just mentioned. 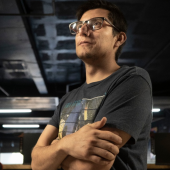